In mid-June, we received a commission to photograph a barn by a large corporate client to photograph a traditional farm barn for a 9x32-foot wall in their corporate office. The client gave us basic ideas of what they wanted but also gave us some artistic freedom. As we live in Arizona, a state not known for its barns, we needed to find an area that would meet our needs. In our research, we found that in May of 2007, Governor Gregoire signed SHB 2115. This bill created the Washington State Heritage Barn Register and established a grant program to support the preservation of historic barns. At the same time, they were educating the public about the critical role of agriculture in the Washington States economy. With this knowledge, we headed to Washington to find the perfect barn.

Washington State's Kittitas County is located in the center of the state and has a rich ranching and farming history. This long history made this county a prime target to focus on photographing barns. 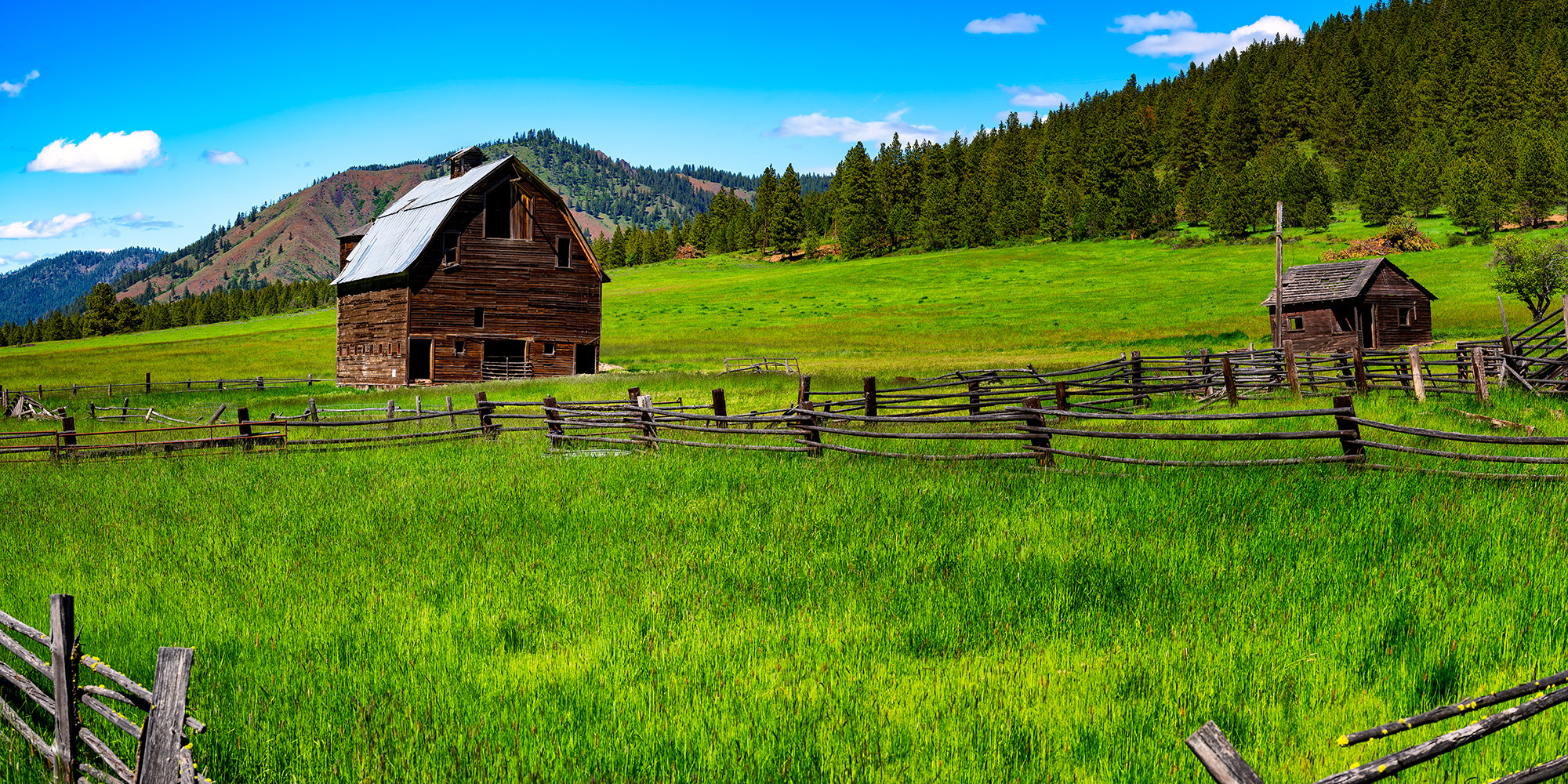 This barn was built in 1896, making it one of the oldest barns in the county, ensuring that it was included in the Washington State Heritage Barn grant program. Nestled in a wide-open meadow of knee-high grass, surrounded by the Cascade foothills, this barn is the last remaining significant building standing of what was once a cattle ranch. This setting allows us to capture the barn in its aging glory without any distractions of any other man-made items visible.

Barn Quilt Trail of Kittitas County guides you along the backroads of Kittitas County to view over 100 barns, each proudly displaying a quilt block celebrating the glorious American Art Form known as quilting. We could not visit all the barns, but we were able to see some of them. Besides getting some great photographs of barns, we were able to meet the current owners and get the history of their barns. 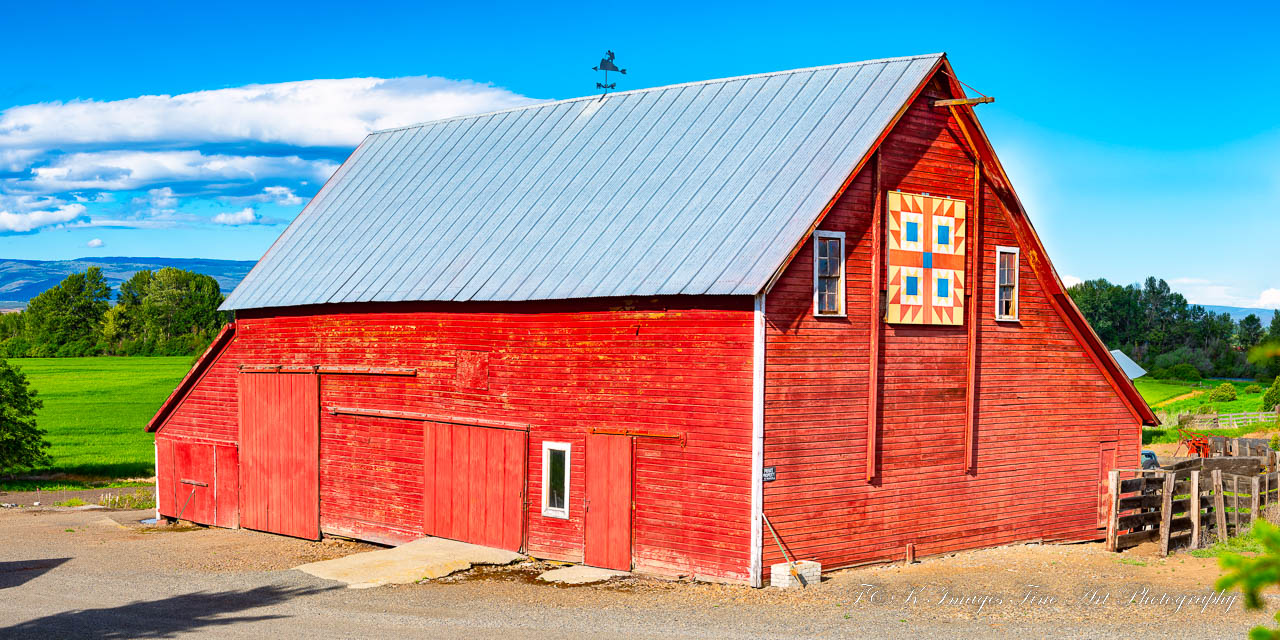 The first barn we visited on the trail was the Evening Star Bear Paw Quilt Barn. This barn was built in 1895 by John Burch. When we say built, we mean it, as the lumber used to construct this barn where hand-hewed. The Brunson family purchased the barn and land in 1912 and still own it, making this a century farm. Besides owning one of the barns on the trail, Kathie Brunson also painted the Quilts on many of the barns. 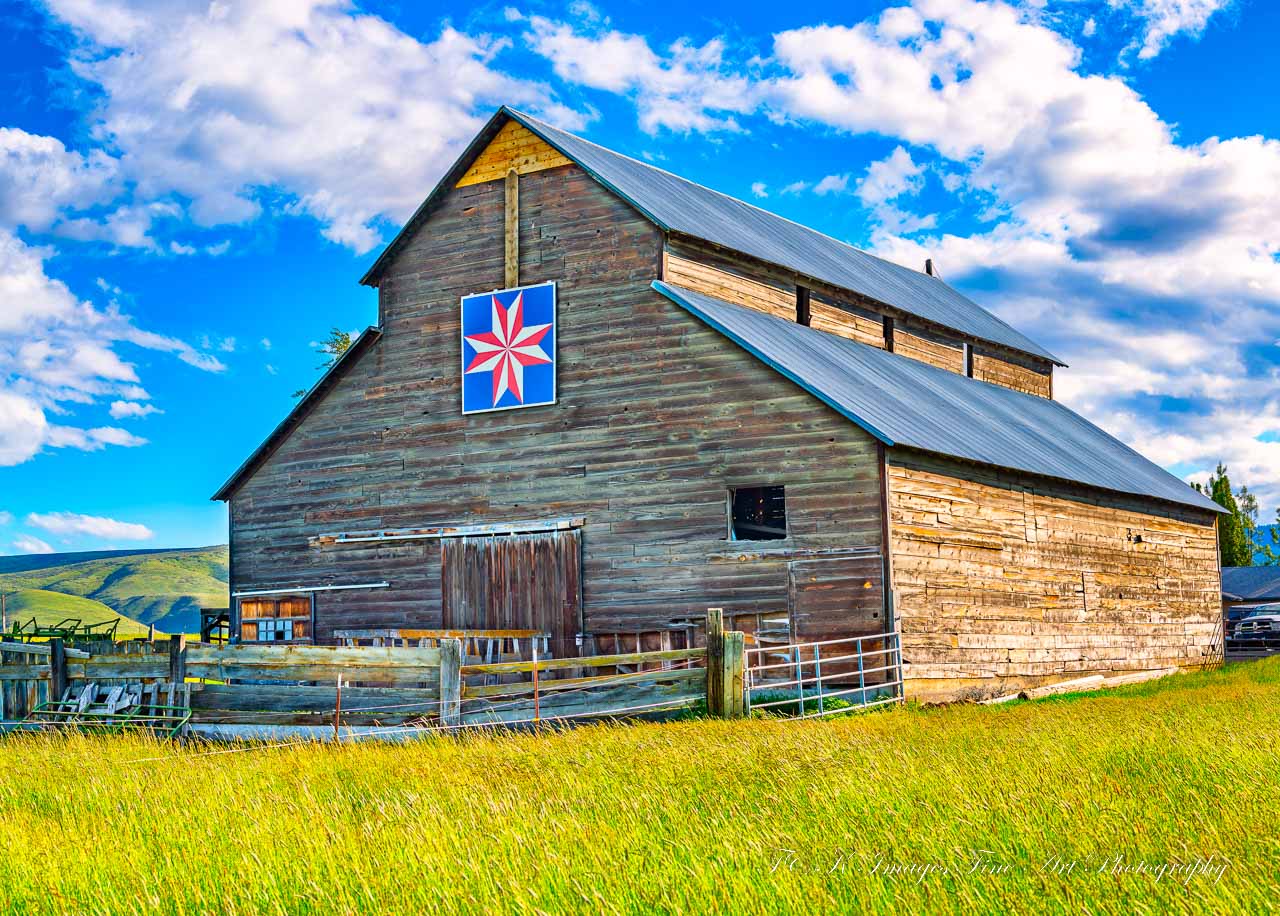 The Eight Pointed Star Quilt Block Barn is a small barn built in 1905 by Harry Weaver for his dairy cows and horses. I love the feeling of this photograph with the barn sitting in a sea of tall grass with the old barn boards highlighted by the afternoon sun. This farm is the home of the cows we photographed for Calf Day Care. 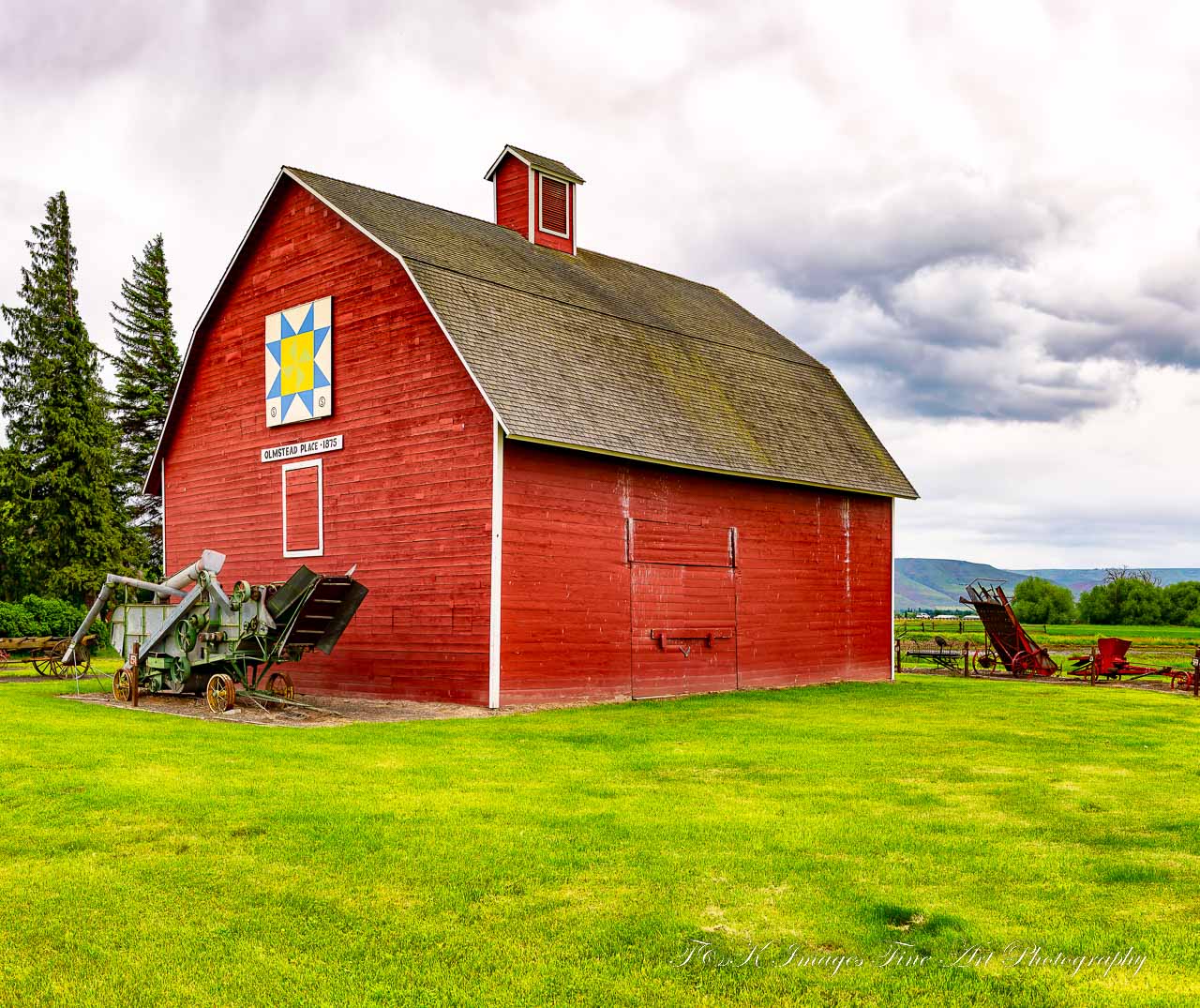 The Barn of Olmstead Place Historical State Park near Ellensburg, Washington, was built in 1908. Standing in front of this barn surrounded by early farming implements, including a Case thrashing machine parked in front, you feel you have been transported back to the early 1900s. That feeling is only broken by the cars and trucks flying by on Interstate 90, only yards away. On the day of our visit, heavy rains were on the way, and the cloud cover provided us with filtered sunlight that brought out the red color barn of the barn.

The Barn Raising Quilt Block Barn was built to dry the lavender raised on the farm. The Quilt Block on the barn acknowledges three generations of quilters in their family. 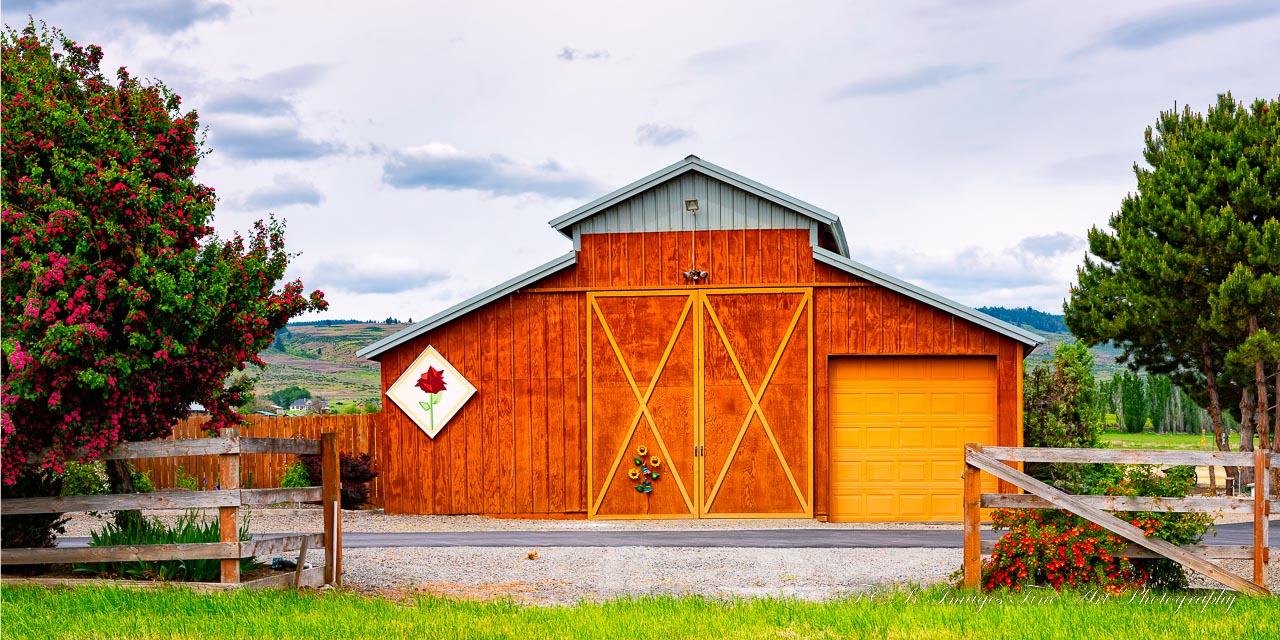 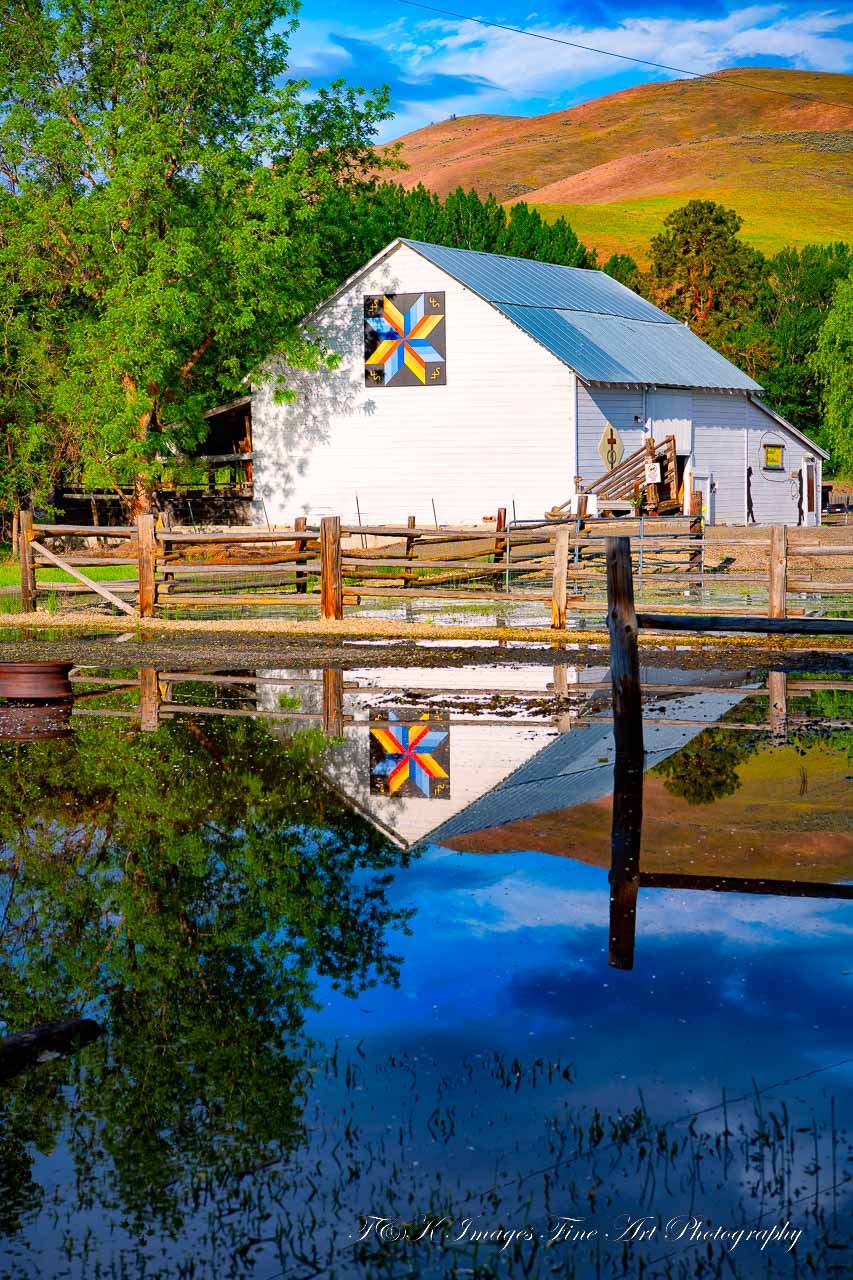 The Quilt Star/Rail Fence Quilt Block Barn. This small barn was built in the early 1900s for livestock and hay storage. We visited this area after heavy rains in the area and the Yakima River had flooded, leaving the barn on an island. The flood waters allowed me to get this great reflection of the quilt block reflection.

We left Kittitas County and headed northwest toward Seattle, Washington, and Puget Sound.

Island County is Washington State's smallest county and lives up to its name, as the county is comprised of nine islands, with Whidbey and Camano being the two largest islands.

Whidbey Island has a rich agricultural history going back to the original native inhabitants who fished Puget Sound. In the 1800s, Euro-American settlers introduced potatoes, loganberries, wheat, and cattle. Located in the center of the island, one of the most productive areas is Ebey's Prairie. During the late 1800s, Ebey's Prairie produced the highest wheat yield per acre in the United States.

Ebey's Landing National Historic Reserve on Whidbey Island is the nation's first national reserve. The reserve is a unique partnership of the town of Coupeville, Island County, Washington State Parks, the National Parks Services, and private property owners, created to preserve the history of the exploration of settlement of Puget Sound. The reserve supports kayaking, sailing, camping, and hiking.

Teresa has a family connection to the Ebey's Landing Ferry House, as her grandfather grew up in the Ferry House as a child of the innkeepers.

One of the most popular hiking trails on the reserve is the Bluff Loop Trail. This trail starts at the beach, affording you great views of the sound, and makes its way up the bluff. Once you reach the top, you have outstanding views of the sound, the Olympic Penisula, Mt Rainier, and the surrounding prairie and farmland. 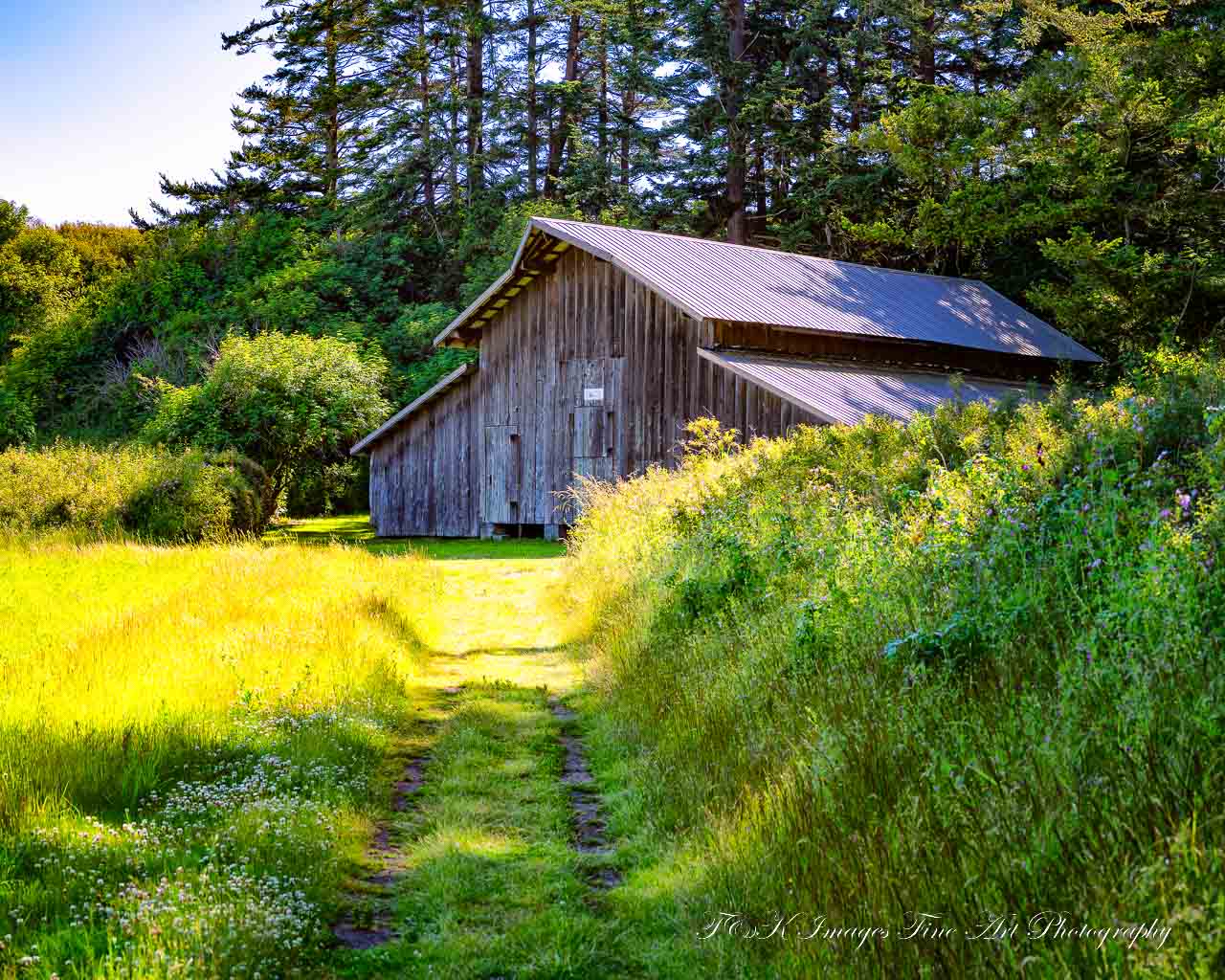 You find the Pratt Sheep Barn hidden among trees at the trail's end. It was built in 1930 as part of a large farm operated by Edward Jenne. Robert Pratt purchased the farm from the Jennes, and upon his death, he willed this part of his farm to the Nature Conservancy. In 2018 the barn was restored and repurposed as a classroom to serve Ebey's Landing National Historic Reserve.

As mentioned above, you have an outstanding view of the farmland below you from the top of the trail. As we were taking in the view, we spotted an iconic barn, its red color in stark contrast to the sea of green farmland all around it. We decided to head over and check it out. 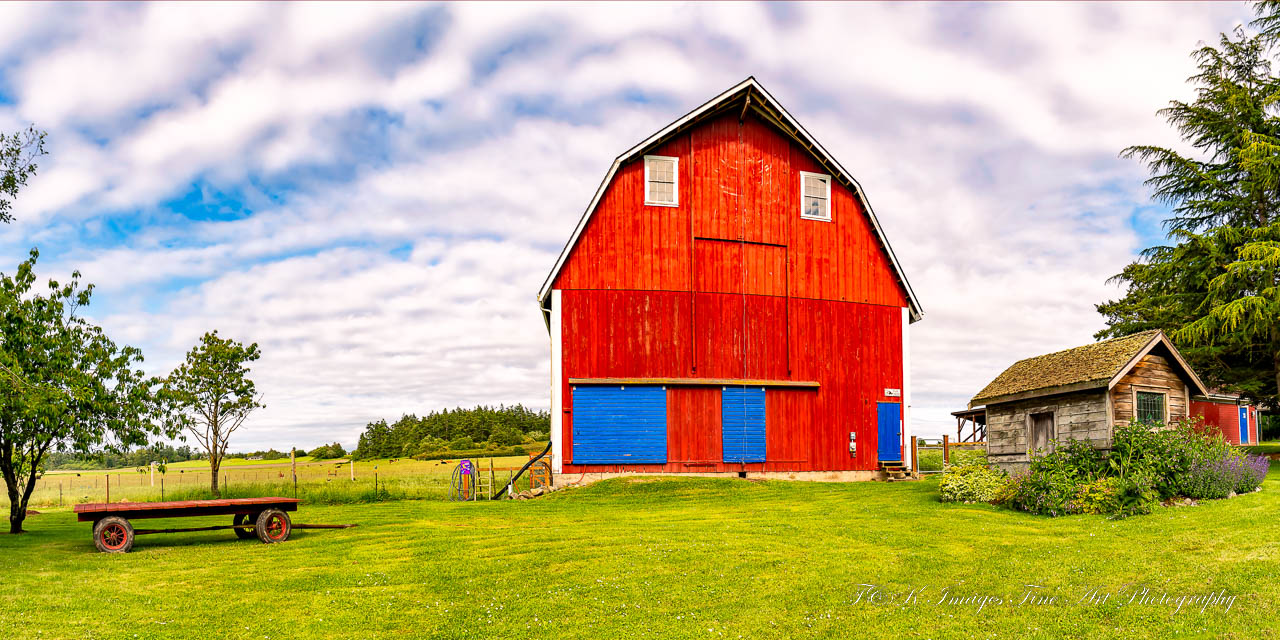 The Jenne Farm Barn was constructed in 1906 by Edward Jenne, making it one of the first barns built on the island. The current owners purchased the farm in 2000 with a focus of preserving it as a working farm and historic site. In 2002, it became a preserved farm in Ebey's Landing National Historic Reserve. The current owner has painted the barn doors blue, giving this barn its own personality. The historic farmhouse has been restored and is now available as a vacation rental, making this the perfect place to stay and enjoy Ebey's Landing National Historic Reserve and explore the historic towns of Whidbey Island.

After reviewing several photographs, our client picked Aging Cattle Ranch Barn Panoramic.  As they are the largest operator of rural lifestyle retail stores in the United States, they wanted to have a reminder of their history in their corporate office; below is the finished 9 x 27-foot image.. 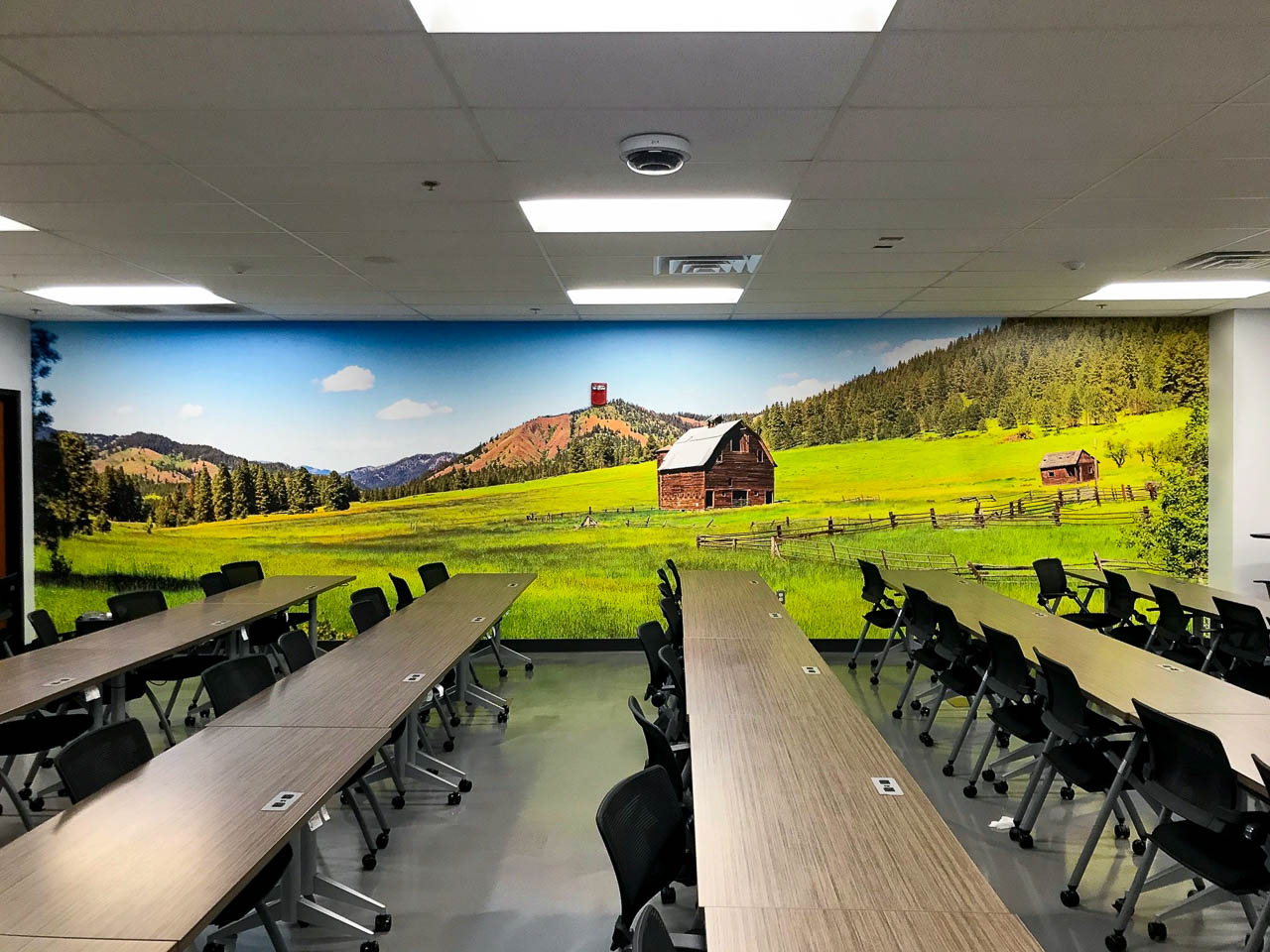