Cathedral Rock is one of the most photographed landmarks in the southwest, and happens to be one of our favorite places to photograph. On the last day of 2018, a very cold winter storm rolled through Arizona bringing snow to locations as far south as Scottsdale. Sedona received 5 inches of snow that day. The red rocks of Sedona are always beautiful, however when you add snow you get a whole new feeling. We have wanted to see Sedona with snow and we were told this was the best snow there in eight years! We have a photograph at this location after a thunderstorm, and we were excited to take this same photograph with snow. We waited until the afternoon since that would be the best light.

In this late afternoon photograph, you can see the spires on the left are picking up the beautiful light.

Sometimes taking the photograph we want is not as easy as it would appear. This is a case in point. Since this location is within the Red Rock State park the plan was to pay the entry fee and go back to the same location. However, when we arrived we found the park closed so we parked on the street to walk in. We were so excited with all the beautiful snow, We had only gotten 100 yards into the park when we were confronted by a Yavapai County Sheriff's Deputy (who asked to remain anonymous) who told us we were trespassing since the park was closed and we needed to leave. Not wanting to give up, Teresa stepped in and outlined that we have waited a long time to capture this moment and we only needed a short time to take our photograph. The deputy's face softened and he said OK, you have 10 minutes.

We walked down to where we had taken the photograph the last time and worked as quickly as we could taking photographs. Then he drove to where we were and asked if we were finished. We said yes and he offered to give us a ride back. This added so much to the entire experience. 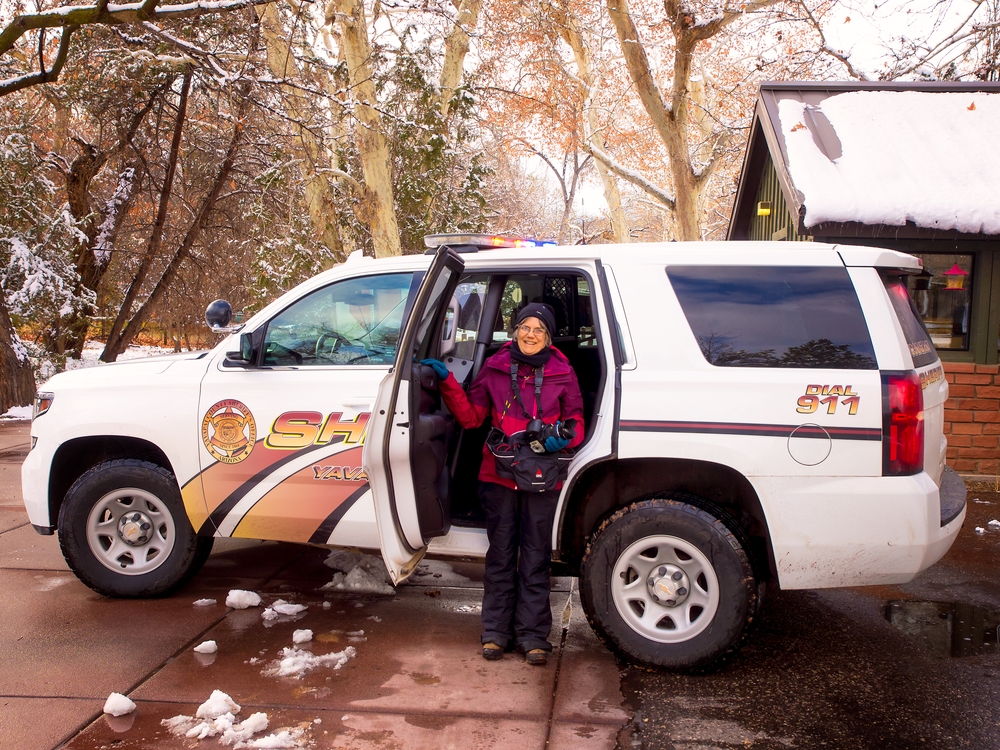